ONE MORE DAY IN PARADISE
Thank the Lord!

What a lovely day! This morning I pinned the quilt layers together on another project that I began several years ago. Now to quilt it and attach the binding. I seem to have misplaced the binding I had ready to go. I think it got lost in the move. Bummer. I used to pin my wallhangings and quilts to the carpet in our other house. Now I don't have carpet in a big enough area so I simply tape the bottom layer (backing) down and hope for the best!! Always begin pinning from the middle. Since my knee replacement I cannot kneel on that knee. Ouch! So I sit on the floor and scoot along. Works for me.

The landscapers arrived this morning and YIPPEE! Our yard is done. The two young guys made quick work of digging out the 5 Rhody rootballs that Dave had cut down as well as the remaining roots of the 2 ugly Juniper Tams that Dave cut out. These guys worked FAST! They used pick axes (Maddocks type with one end flattened to cut through roots and stuff.) That is your new word for the day. Anyway, they planted several plants to replace the overgrown rhododendrons that Dave had cut down. If Dave had tried doing what these guys did, he would now be in the hospital!

While the landscapers did their thing, and after I had my quilt top pinned, I began reorganizing our shed. I love to organize things. Dave is always hesitant to change anything, but I was tired of tripping over stuff because things were not stored properly. Success! Next up....someday soon.....will be the pantry and then my clothes in our closet. It's time to toss some stuff. I hate that but it has to be done.

Here is how the yard shaped up after all the work the guys put into it. And it looks so much better since we had the house painted! 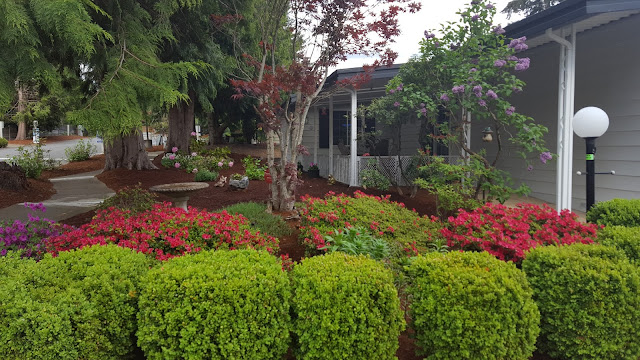 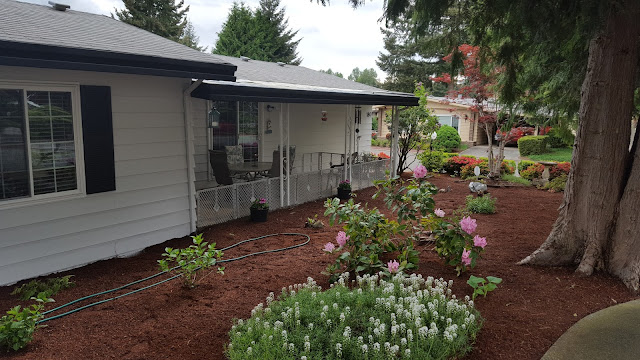