People are the Fabric of My Life

What better way to spend part of an afternoon but to drive about 3 miles down the road to sit on the deck and visit with a lady from our garden club. Helen is a sweet 89 year young widow who still lives in her own home on about an acre, still drives and tends her flower garden. It is not always possible during our garden club meetings to really get to know each other even though we always have a luncheon afterwords.

As we sat on her very nice deck looking out over her flowers and the neighboring huge pasture off to the side, I discovered that when she and her husband were first married they lived in the Cedar River Apartments before buying their first house, one of the wartime houses that were offered for sale in the late 40's in the Renton Highlands. I mused over the thought that she had lived there most likely when my husband Dave's parents lived in those same apartments before buying their home in Skyway. What a small world!

Helen had phoned me to ask if I would like to come visit and see her flower garden which was looking especially nice right now. This lovely lady had just hosted a wedding for her daughter in her back yard! My goodness, I hope I am fortunate enough to be as spry as she is should I live that long! After a pleasant talk, she showed me her flower garden, spouting off the names of each plant. My memory is not as good as hers at remembering all the plants I have in my yard. She had placed a piece of string on her shoulder prior to my arrival and asked if I could tie up one of her delphinium flowers for her since it was leaning way over. Here are some photos of her flower garden. Hasn't she done a beautiful job with the mix of colors and texture? 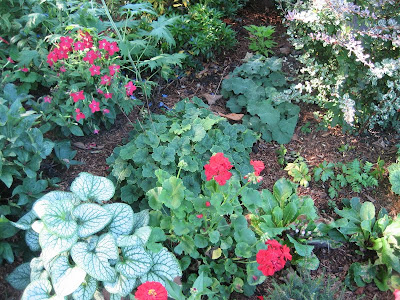 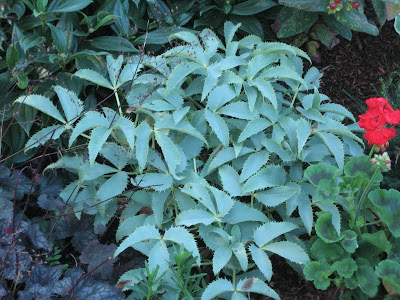 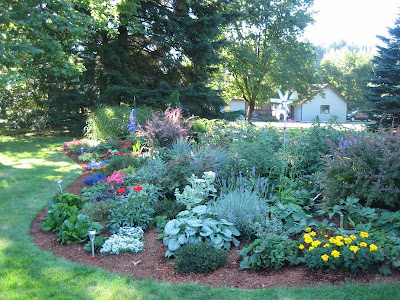 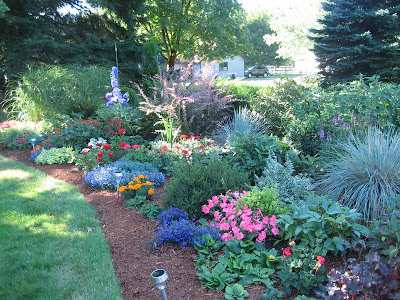 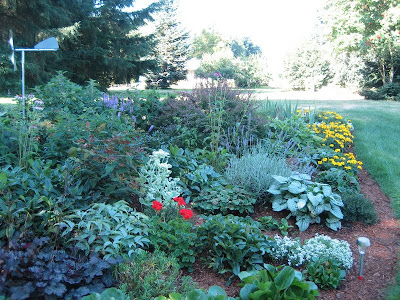 I feel so blessed to have an abundance of people in my life. But then, I'm a people person and getting to interact with folks energizes me and gives me such joy. I know that we people are all different and some like the solitude of their lives, while others are content with the boats and motorhomes and vacation condos they retreat to. I like those things too. Well, I would if I actually had them! But meeting and getting to know people and finding commonalities is the most fun I can think of having. I do believe in the idea of "Six Degrees of Separation" and if I spend enough time talking AND LISTENING to a person I learn the most amazing things and find that we usually have something or someone in common! Try it next time you have the opportunity for conversing with someone new to you. See what amazing facts you can uncover!
Posted by Sandy Young at 10:27 AM No comments:

Last Thursday, Dave and I had the pleasure of getting together with some of our high school crowd for a golf tournament at Maplewood Golf Course. What fun!! The night before some of us got together at Jack's in the Renton Highlands to share a bite to eat as names were drawn and teams formed. There were lots of loud protests and a bit of trash talk during this process....all in good fun!

There were 5 teams and since we had 6 girls one team had 2 girls. We played a scramble format, which is a super fun way to compete. It goes like this: Each one in the four or five-some tees off and the best shot is selected. Then we all tee off from that spot and repeat the process until the ball is holed. The only requirement was that each player must have 2 of their drives used, then we could take any drives. We were all in golf carts and we had a preview of things to come when one of our drivers (RICK) got his cart high-centered when going over the curb just after teeing off on the first hole! He and Steve had to get out and push. We did kind of go downhill from there, since our group came in last. We had an even score, meaning we shot 72, which is par. We did have lots of laughs along the way as our balls seemed destined to go every which way but straight!

Here we are pictured shortly before the first group teed off. My teammates were from left to right, Tim Cummings, Rick Scappini, yours truly, and Steve Patterson.

Dave's team, though they had 5 players, came in next to last with one under par. His group was right ahead of mine and since one of his players had never golfed before, they slowed us down a bit since the guys were giving this fellow lessons on each hole. His teammates were Michelle Cooper Dieckman, Dave, Rick Sodorff, Ron Lee and Gary McMillan. A side note is that only 2 couples of the many who married classmates showed up to golf. Michelle & her husband Al and Dave and me. 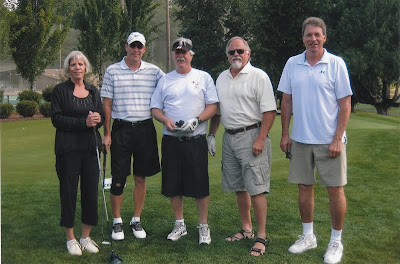 The other 3 teams all tied with 5 under par, and since we only had trophies enough for one team, a team was drawn from a hat (so to speak) and declared the winning team.

The person who is most responsible for organizing us, Mike Willis, and his wife Diane, had us all over to their home for a catered dinner (we all did pay for it) in their fabulous back yard. And who catered? Of course....another former classmate, Marilea Addington Peterson and her sister Judy. Marilea is married to classmate Jim Peterson. Isn't it wonderful that so many of our classmates are still married to each other!? Oh...my....goodness!! In 6 years we will celebrate our 50th high school reunion!! WOW!! Add 3 more to that and Dave and I will celebrate OUR 50th Wedding Anniversary.

Some other classmates who didn't play in the tournament, showed up for dinner and a few others who played weren't able to attend for one reason or another, and both Dave and I can't wait until next year's tournament....Lord willing!

Birthday celebrations for Pete and Shauna

Kyle and Kari came down from Bellingham so they could take Pete and Shauna out for their birthdays (which are on the same day.) That meant that we had the pleasure of having all four grandkids for the evening. We fed them dinner and played and before long it was time for bed. Kyle and Kari and kids spent the night but the Myron girls went home with mom and dad for the night. I had noticed at about 11 pm that Hailey escaped from the bedroom and I found her sprawled out on her tummy just outside the door in the hall.


In the morning I made waffles for breakfast, with chocolate chips of course, and Jill arrived at about 9:30 with our niece Emily, who I had invited to spend the day with us. Emily was a big help and kept the little ones entertained quite well!

Kyle and Kari and kids had to leave at 11:00 am to go to her mom and brother's birthday celebration, so I tried with marginal success to have all four grandkids sit together for a photo.

Dave was sick all day Saturday so he pretty much stayed in the bedroom most of the day. Poor guy! The reason we had the Myron girls was that Pete and Shauna had rented a Harley Davidson "Fat Boy" for 24 hours so they wanted to make the most of it. They had planned on doing a sky dive but the weather was too overcast so the place in Snohomish where they were scheduled called them in the morning to let them know they would have to postpone it. Pete and Shauna did stop by for a little while in the afternoon so they could get a photo with their girls. Shauna was very bored sitting on the back!! I do believe she is eager to get back in the driver's spot on a sports bike again.

Jill very kindly came and picked up Emily and Pete came by to pick up the girls and I had kind of a boring evening since Dave was in bed by 8 pm. Shauna had Pete's family and Jason & me (Dave still wasn't feeling tip top) over for dinner Sunday at 4 pm. I made a gluten free chocolate cake which was pretty tasty. What a fun family time! The guys raised two walls of the huge shed Pete is building.


It was fun watching 5 little girl cousins play together.

All in all a fun birthday weekend. Sure wish Dave had felt better so he could have enjoyed himself. Thanks, Emily, for your help on Saturday.

At coffee last week with Dorene, Sharron & Lynda, I picked up a wonderful idea from Dorene. THANK YOU, D! She had been frustrated with her jewelry storage and found an over-the-door pocket type storage hanger to solve her problems. I immediately picked up on that suggestion and instead of looking on line for what I wanted, I decided to set about making one. Now that mine is finished, I found that for $14 I could have purchased this one from Amazon:
http://www.amazon.com/Household-Essentials-01943-80-Pocket-Organizer/dp/B0010XX7ZQ/ref=acc_glance_k_ai_ps_t2_t_4

That would have been too easy! And look, that one is double sided and has 80 pockets!! I bought some white vinyl with a flannel back and some heavy clear vinyl. I didn't have a pattern, so in my usual fashion, I began rotary cutting and figuring it out as I went. Here is what I ended up with.

My version has 40 pockets, although with the gaps in between rows I probably could have squeezed them together and made another row. As it is, I had just enough slots for my bulky necklaces. The Amazon design looks to have smaller pockets so some of my pieces may not have fit in it anyway. As Dorene suggested, I put matching earrings with those necklaces that have them. This has freed up my jewelry drawers for all my smaller necklaces so they aren't all in a tangle like they used to be. Now that I see my pieces like this, I better not buy any more black or brown necklaces!!

The biggest struggle with sewing this was trying to scrunch all that stiff vinyl around my sewing machine as I stitched the pockets in place. It's not the best job of sewing I've ever done, but aside from posting it here, my husband and I are the only ones who have to see it. He wasn't thrilled that it covers the door handle, but how often do we close the door when we are in the closet?? Yeah, like never!

If I had it to do over again, I would just buy an organizer, but then again, there is something to be said for the feelings of accomplishment and creativity.
Posted by Sandy Young at 10:02 AM No comments: