Posted by Sandy Young at 6:25 PM No comments:

A GOOD REMINDER
but sometimes I think there really are mistakes. 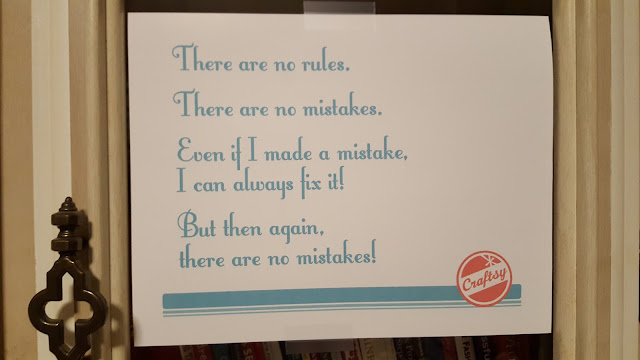 Posted by Sandy Young at 9:56 PM No comments:

AND THIS, LADIES AND GENTLEMEN,
is my $9 Goodwill table

Posted by Sandy Young at 9:19 PM No comments: 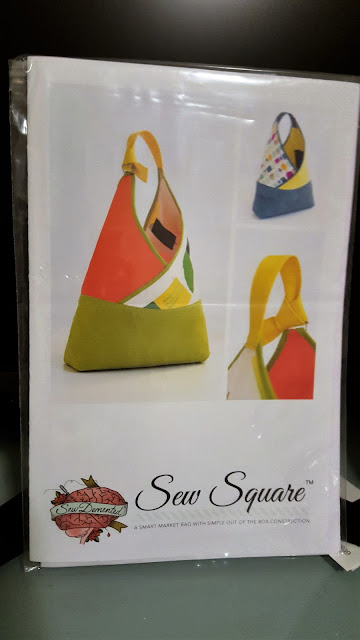 Posted by Sandy Young at 9:44 PM No comments: 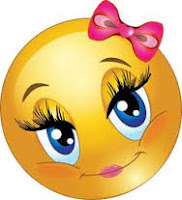 Posted by Sandy Young at 8:19 PM No comments:

These photos are from 2005, when Dave and I had the pleasure of meeting Arnold Palmer when he was at Suncadia, playing on the Prospector Course for it's grand opening. Since we owned a lot in Suncadia we were invited to attend and one of the golf instructors at our local course, Jodie, actually knows Arnold! Her brother was his caddy many years ago and they kept in touch with each other with letters and cards. Both Dave and I have taken lessons from Jodie and when Arnold invited her to come, and she found out we would also be there for this event, she suggested we meet up and she would introduce us to Arnold.

Arnold signed Dave's golf hat and now that hat is tucked away never to be worn again. Arnold Palmer will be greatly missed by everyone who knew him and all who knew of him.

Posted by Sandy Young at 8:57 AM No comments:


CHARLOTTE TURNED SIX
on Thursday, but her party was today 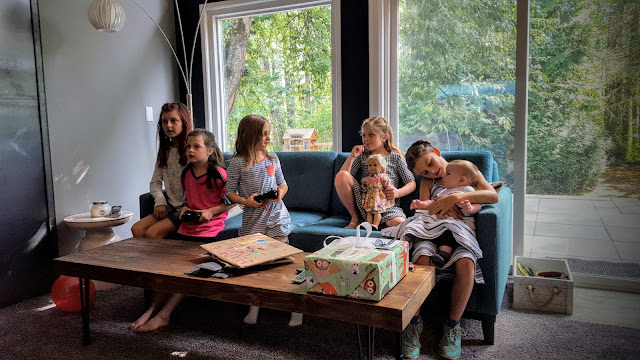 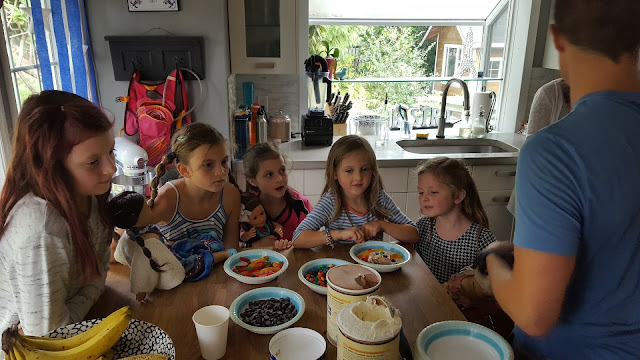 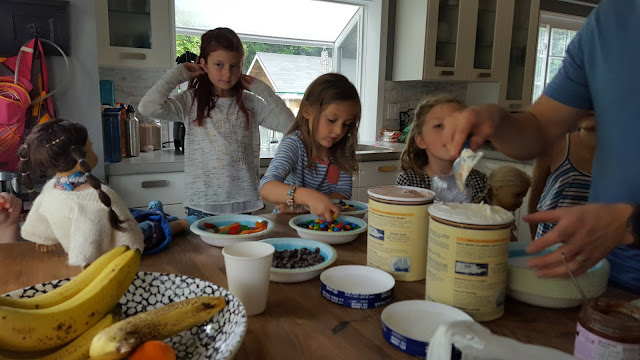 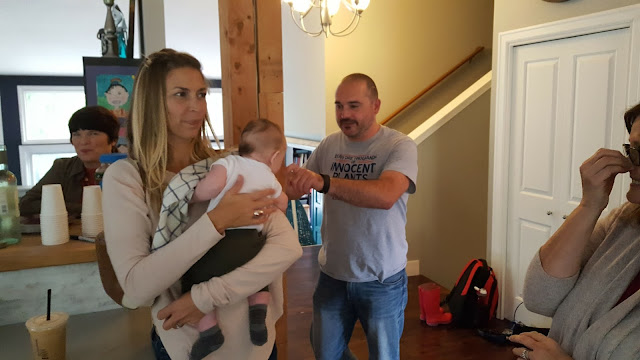 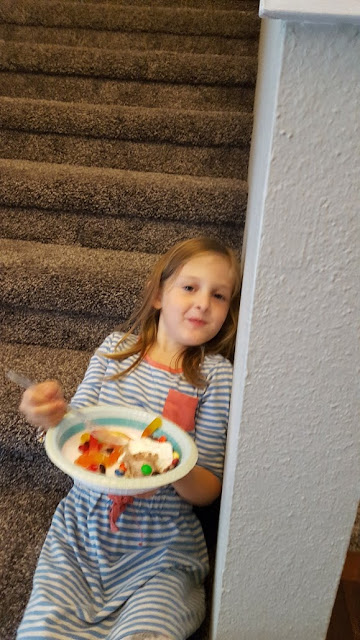 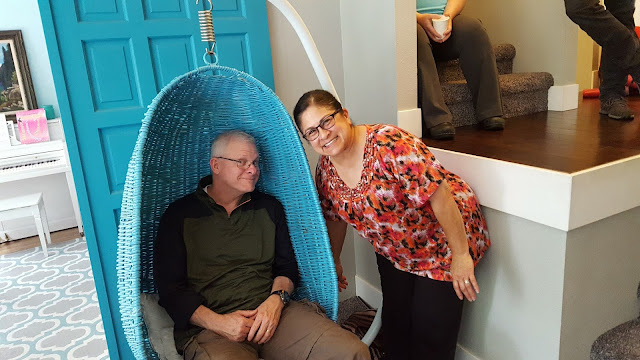 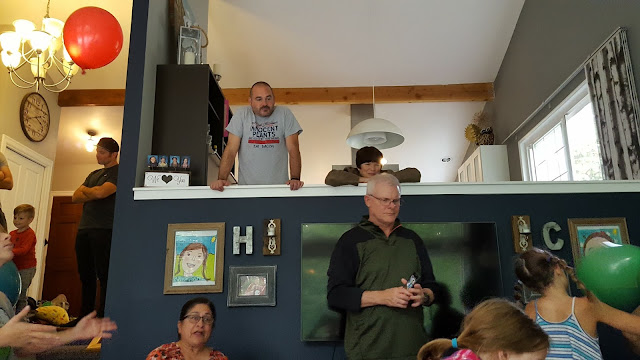 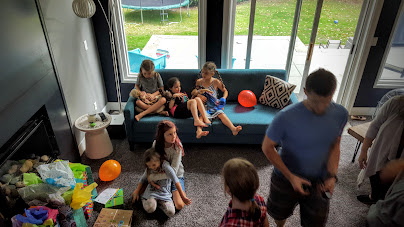 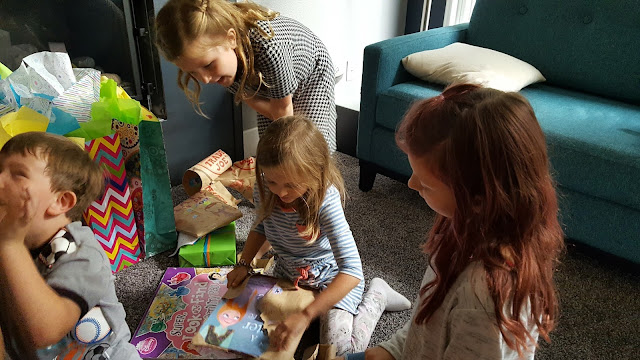 Posted by Sandy Young at 7:19 PM No comments:

$9 GOODWILL SEWING TABLE
becomes not such a good deal

It began as such a great day! Merrely picked me up at 9:50 to meet Tamie for coffee at Starbucks. Then she and I made the short drive to Goodwill. (We are both Goodwill fans.) I wanted to see if I could find a small table for my Babylock Sewing Machine so I could have that machine set up for embroidery and use the wonderful Bernina 790 for sewing. I would then be able to utilize my sewing time better and have two projects going at the same time.

Lo and behold, there was a perfect 30" wide simple desk/table and only $9!! I paid for it and had them put Dave's name on it so he could pick it up on his way home from lunch with Chip. All was looking fine, until I decided to plop down in this big overstuffed chair that was just across from the desk. PLOP.....unfortunately I didn't notice the solid metal shelf above the couch and the back of my head clanked into it. Ugh. I saw stars and then got a bit worried. Uuhhhh. I'm on a blood thinner for another week. I knew it could be a serious situation if I had an injury, especially a head injury.

After I got home, I called the anti-coagulation clinic to ask their advice. Would this be a potential problem, since I do have a lump on my head but no bleeding? They told me I did the right thing in calling as I needed to watch out for stroke-like symptoms as a potential result of a brain bleed. They suggested I go to Urgent Care just to be on the safe side.

SO, I then needed to call Dave again and tell him that he needs to come directly home after picking up the desk so he could take me to urgent care. Poor Dave! We kind of knew it would be an extra expense because I was probably fine, but how do you make the choice to not get it checked out? Off we went and 3 hours later we were back home after blood work and a CT scan showed no problems. The doctor encouraged me that we did the right thing in coming in and that I still needed to watch out for headache, blurry vision, etc, etc, etc for about 24 hours.

By the time we got home, I needed to take a nap! A late nap at that.

Posted by Sandy Young at 9:39 PM No comments:

PICKED UP MY MACHINE TODAY
after getting  the staples out of my knee!

After Dave drove me to the doctor's office to get my staples out, he was kind enough to take me to Sewing Machine Service to pick up the Bernina 790 I'm borrowing (a part needed to be replaced) and he got to meet the owners and others who work there. Such a fun place! I even saw a friend from my old Garden Club who brought her machine in to be repaired. Tomorrow I hope to get the sewing machine set up and get back to spending some time sewing again. 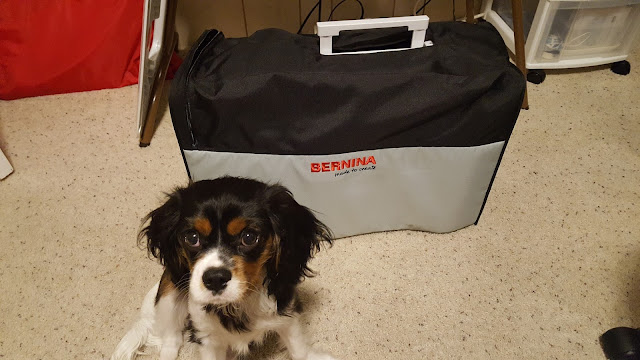 Posted by Sandy Young at 9:54 PM No comments:

Posted by Sandy Young at 6:20 PM No comments:

SURPRISE!!
the begonia is in bloom 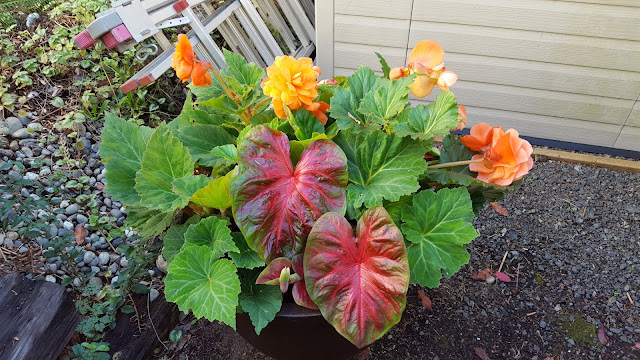 Posted by Sandy Young at 3:49 PM No comments:

NOTHING
absolutely nothing to do except rehab 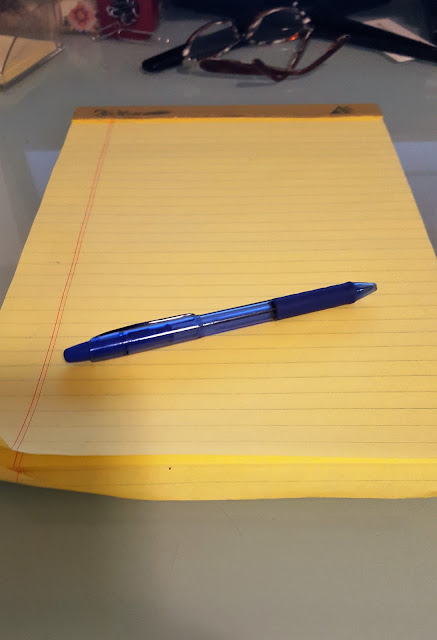 I'm really getting tired of PT (pain and torture.) I would rather have a list of things TO DO! I'm tired of TV and even tired of knitting and crocheting because Beemer wants to jump on my lap and chew on the yarn. Sigh.

I still have these nasty staples in place. I couldn't get them removed last week so need to wait until Wednesday. They pull on my skin when I do my knee flexing exercises. September is slipping by and it will be October and still I will be stuck with this rehab. Deep breath. I.....CAN......DO......THIS. maybe.

Posted by Sandy Young at 7:21 PM No comments:

PIZZA FOR DINNER
and Unlocking the Mysteries of Genesis videos

Posted by Sandy Young at 7:28 PM No comments:

I'M DONE WITH THE WALKER
and onto using a cane

This morning at physical therapy I was pleased to hear that the range of motion is increasing in my knee. At two weeks I am at 114 degrees of bend. On Monday I was only at 95 degrees (before doing any exercises at pt.) Getting my leg straight is another matter. Only -10 degrees and after working it I was able to get it to -3. I was encouraged because I am still in loads of pain and had been wondering if I would ever get it back! Not to worry.

After Dave got home from lunch with Chip and stopping in to see my aunt, I walked with Dave from our house towards the mailboxes.My hip was really giving me some grief so Dave made me stop and wait for him to get the mail so I would be able to hopefully make it back home. Ouch! I'm getting there!

Posted by Sandy Young at 6:29 PM No comments: 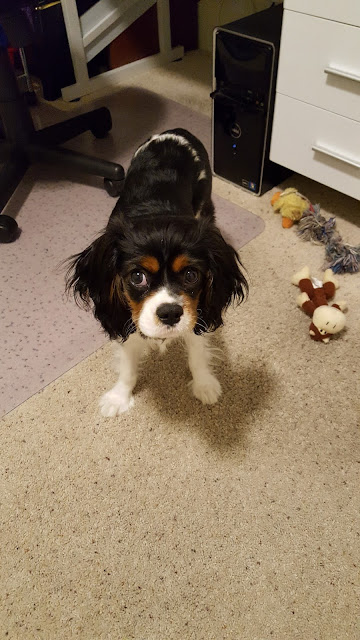 Posted by Sandy Young at 9:56 PM No comments:

IF WE WANT TO HAVE AN OBEDIENT DOG
it is time to shock him into it! 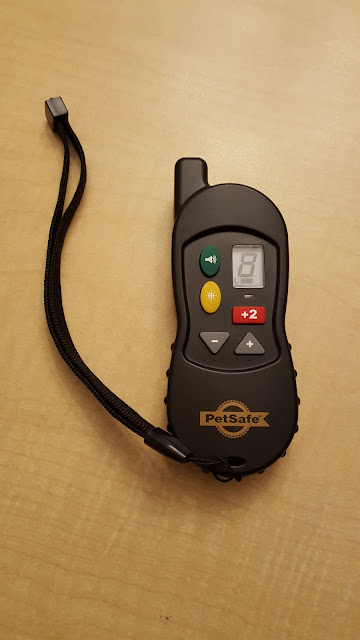 I ordered a shock collar for Beemer a few months ago and then found out that the dog needs to be at least 6 months old before he should use it. It wasn't until yesterday, when Bobbi came over and asked me where his shock collar was, that I remembered that we even had one! Poor memory. I'm so glad she mentioned it because today I got it all set up and have been using it on him periodically. Like when he begins chewing on the buttons on my blouse. Unfortunately the zap causes him to hop off my lap so I'm not sure if he thinks my lap is the culprit or what!

It only looks like a high setting. Eight. It is actually Low 8 and I've tried it on my hand and it is quite mild. The green button emits a sound but so far that hasn't deterred him. He has been such a lover all day long that I haven't had to use it more than a few times. The real problem is when company comes and he jumps up at them. He is gently with his jump because he is so small but it is an annoyance, so we are hoping that this device will correct that behavior.

Beemer is a lover and a licker. I know most people don't like a dog to lick them, but hopefully in time we can curb that some. I'm not as upset about that unless he opens his mouth and his teeth touch my skin! He has been quite a good comfort for me though, and Dave is out taking him for his daily walk right now. I'm still glad he is part of our lives! Dave may have a different opinion!
Posted by Sandy Young at 7:07 PM No comments:

Posted by Sandy Young at 9:57 PM No comments:

LOVE THE FLOWERS
I should have taken these photos days ago

Posted by Sandy Young at 7:49 PM No comments:

ALL DAY LONG
force my leg to straighten, force my knee to bend

Oops, I've missed a few days, but you know what I have been doing. Not focusing enough on photos.

Posted by Sandy Young at 6:07 PM No comments:

PHYSICAL THERAPY, PILLS, PALATABLES AND PAIN
recovery has begun and it is just putrid

Posted by Sandy Young at 6:03 PM No comments:

A BIT OF PROTECTION FROM AN ACTIVE PUPPY
and of course Beemer wants to be near me! 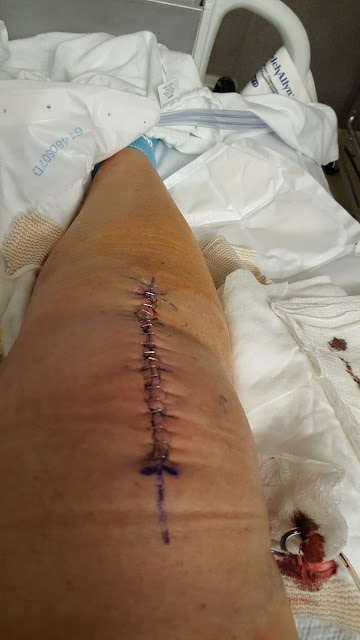 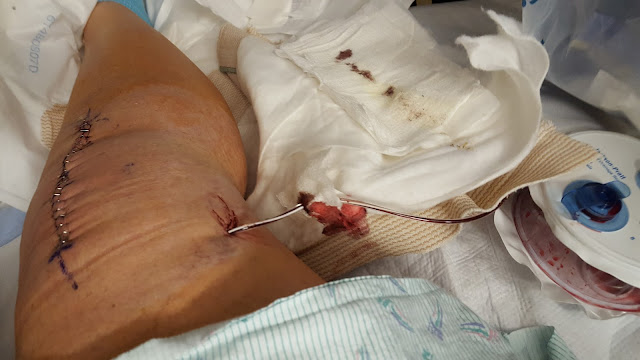 Posted by Sandy Young at 5:50 PM No comments:

Sleepy
I am so tired

Posted by Sandy Young at 5:42 PM No comments: 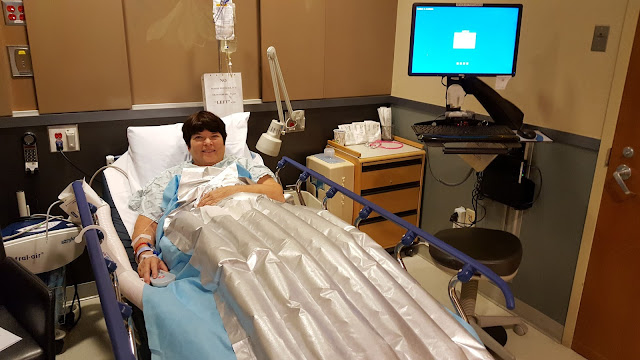 Of course, this is before!
Posted by Sandy Young at 6:25 PM No comments:

SOMETHING TO LOOK FORWARD TO
after I get back home

All it took was for Dave to pop over to Ed's house to see the fire in his fireplace. Now Dave is convinced that our fireplace is OK for burning wood in. It has never been used, so we were a bit unsure if we should try. Since Ed's fireplace is exactly like ours, except for the stone work, Dave says he will get a grill and some tools and have it ready to go by the time I get home from the hospital! YEA! We discovered when we remodeled that we could not convert it to gas (legal issue with these homes) so we just sort of put the whole idea on hold.

I can't wait to cozy up with a nice fire going. 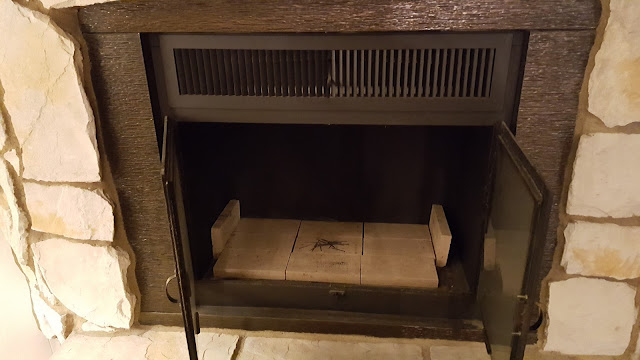 Posted by Sandy Young at 8:45 PM No comments: